Stratusphere Optimizer – What is it?

The Stratusphere UX Optimization feature automatically optimizes CPU/Memory and keeps “Bad Actor Applications/Processes” from hurting the performance of the users on priority applications brought to the forground.

Since release of the Process Optimization feature many clients have reported extending life cycles for physical machine by 6-18 months with greater User Experience. This has resulted in a huge capital savings for many clients.

Process Optimization is a very simple, automated and almost zero impact feature that is included with Stratusphere UX. You can turn it on for single machines, groups or globally from the administration pages in Stratusphere UX. There are 4 Profiles that you can select depending on the type of machine(s) that you are targeting. Other options include: (Path\Executable to be exclude), (Processes to be Raised\Lowered), (Processes to be Terminated).

Optimizer can be use in Physical, Virtual and Cloud environments. It is recommended by Liquidware SEs that all attempts be used to “Fix” the issue using the data provided in Stratusphere UX before turning on Optimizer. The reason is that Optimizer does not fix bad actors. It only lowers their impact on the “In Focus” application.

Note: Optimizer was designed with security and reliability in mind from day one. Our “Do No Harm” philosophy is at the heart of the Process Optimization feature. If the machine is not under stress Optimizer does nothing! If optimizer ask a process to lower its CPU priority and it says no, optimizer will not force the change and it will not ask again. For example, you should never change the CPU priority of a security/virus application.

How to Enable Optimizer in Stratusphere UX: 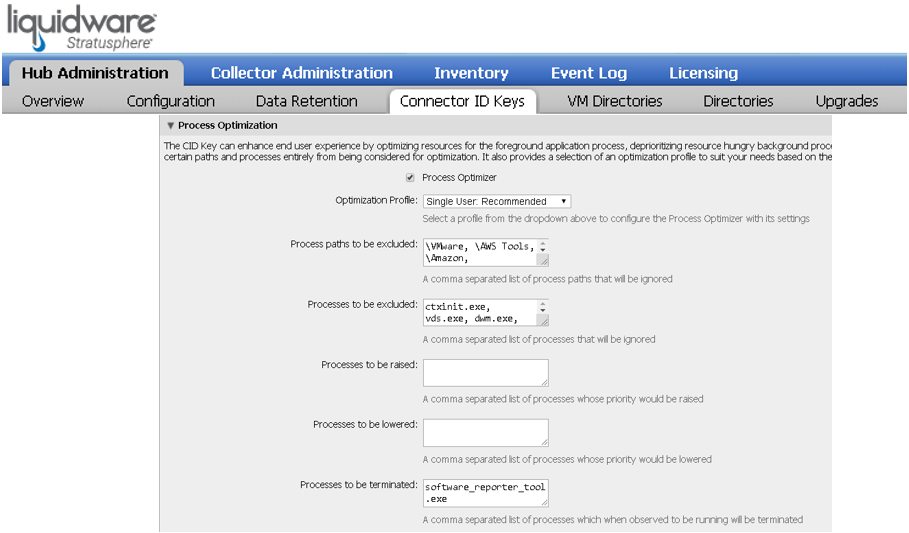